Your skin is your body’s largest organ. It has several important roles:

Your skin has 2 main layers – the Epidermis and Dermis.  The upper layer, or Epidermis, is made up of different types of cells:

The typical number of melanocytes in your skin is between 1000 and 2000 cells per square millimeter of skin. WOW! The difference between fair people and dark people is not the amount of melanocytes, but how active the melanocytes are.

DID YOU KNOW……Albinos lack an enzyme, tyrosinase, that is required for melanocytes to produce melanin.

It is a problem with the melanocytes that causes melanoma. They become damaged – mainly by UV radiation or through a faulty gene passed down through families, and grow out of control. A clump of mutated melanocytes (or any cancer cells) are known as a tumour.

Melanoma occurs mainly due to too much exposure to sunlight or UV radiation but it may also occur in places that have never seen the sun.  This may be due to families passing down faulty genes that make moles develop into melanoma or for melanomas to form where there haven’t been any moles.

The most common places for melanomas to occur are the skin of men’s backs and on women’s legs, but melanoma can occur anywhere on the body. Other common places are:

Melanoma can be treated successfully if it is caught early but if it spreads to other parts of the body (known as metastatic melanoma) the prognosis or outcome is poor.  This is why early detection is so important (see our ‘prevention and early detection’ tab)

Melanoma is staged or classified according to how thick it is – or how deep through the layers of skin it has spread.  This includes whether it has spread through the skin layers to the lymph nodes (these drain fluid around your body) or to other organs around the body (known as metastatic melanoma)

Medical staff can use different ways to assess your melanoma:

Medical staff use the following staging method and this will help them plan your treatment and estimate your prognosis (or outlook):

Doctors look at how far the melanoma tumour has grown within the skin. This is worked out looking at the thickness of the melanoma using the Breslow measurement (done by a pathologist using your biopsy).  The thinner the melanoma, the better the prognosis.  In general, melanomas less than 1mm thickness have a very small chance of spreading.

The tumour is given a rating of 0-4.  It may also be given a small letter which doctors use to give information to other doctors on whether the surrounding skin has ulcerated as well and how quickly the tumour cells are dividing.  Ask your doctor if you have any questions about the stage of your melanoma.

N stands for spread to nearby lymph nodes (bean-sized collections of immune system cells, to which cancers often spread first). The N category is given a number (from 0 to 3) based on whether the melanoma cells have spread to lymph nodes or are found in the lymphatic channels connecting the lymph nodes. It may also be assigned a small letter a, b, or c, depending on how it has spread. Ask your doctor if you have any questions about the stage of your melanoma.

This classification is based on whether the melanoma has spread from the area in which is started or originated (known as the primary tumour). It takes into account which organs it has reached, and may also rely on measurements of a substance called LDH in the blood

One the TNM ratings have been done, they are combined to give an overall score or staging (Clark’s level). These are usually given a number I-IV.

In general, patients with lower stage cancers have a better outlook for a cure or long-term survival.

DID YOU KNOW…..Clark's level is a staging system, used in conjunction with Breslow's depth, which describes the level of anatomical invasion of the melanoma in the skin. It was developed by Wallace H. Clark, Jr. at Harvard University and Massachusetts General Hospital in the 1960s.

Causes of melanoma and your risk

Anyone can develop skin cancer, but if you’re in the following groups then you’re at higher risk then the rest of us:

In 1975 Dr. Thomas Fitzpatrick, a dermatologist at Harvard Medical School, developed a scale to classify a person’s complexion based on tolerance to sunlight.

Have a look at some of your skin that has never seen the sunlight and match it to one of the pictures and descriptions below. The lower your skin type, the higher the risk of melanoma. 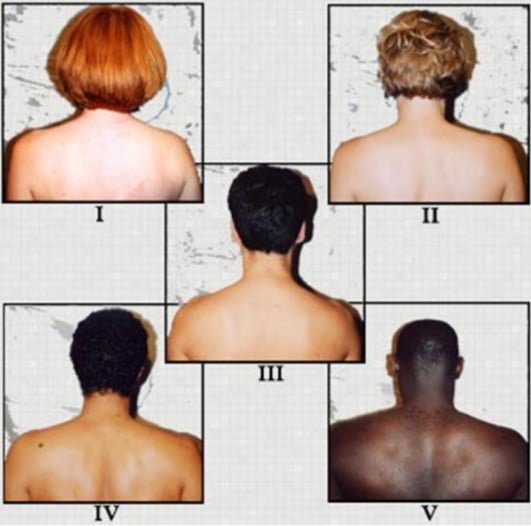 If you have any questions about your treatment you should of course be guided by your medical practitioner.

Clinical trials are very important as they help develop a greater understanding of melanoma to improve the ways we can prevent, screen, diagnose or treat it. They aim to ultimately improve the quality of life of those who have the disease.

Clinical trials take place all over the world and vary in size. They are conducted by doctors, nurses, scientists, research assistants, data managers, pharmacists and other health professions; teams who work together to look after patients during the course of the trial. Each trial follows a Human Research Ethics Committee-approved – a carefully controlled protocol. The protocol is also a detailed plan for the aims of the research.

Trials are strictly voluntary and you have the option of withdrawing at any time.

There are a number of reasons why participants tell researchers that they like being involved in clinical trials. These include:

There may also be risks or downsides involved in participating in an experimental treatment, such as:

You may be able to participate in some clinical trials in Tasmania but the majority of trials involved in the melanoma space at the moment require interstate travel – usually to Melbourne or Sydney. Some of this cost is paid for by the companies involved in the trial.

Please speak to your Specialist if you would like more information about clinical trials that may be appropriate for you.

You can also find out more information about clinical trials being undertaken in Australia and New Zealand via Melanoma and Skin Cancer (MASC) Trials. Membership is free.